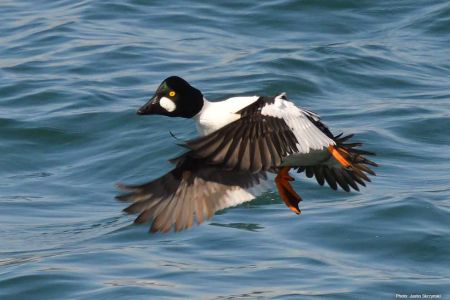 The common goldeneye, like the Barrow’s goldeneye, is named for its brilliant yellow iris. Common goldeneyes fly in small compact clusters, with their wings making a distinctive whistle at every wing beat. Male common goldeneyes have blackish iridescent green heads with a white circular patch between the eye and the base of the bill. The breast, sides, belly and patch across the secondaries and secondary wing coverts are white. The back, rump and upper tail coverts are black and the tail is grayish-brown. The bill is black and the legs and feet are yellowish. Female common goldeneyes have chocolate brown heads, a whitish neckband, and speckled gray back and sides. The upper wings are brownish-black with the middle five secondaries colored white. The bill is blackish, becoming yellow near the tip, and the legs and feet are yellowish.

Nova Scotia is a worldwide destination for sport fishing. With 6,700 lakes and 130 rivers the province offers a variety of sport fishing for any level of angler. Whether it’s an afternoon of solitude, drifting through the inland waterways, or a more adventurous outing in deep waters, the opportunities for memorable experiences are limitless.

Speckled Trout can be found in Nova Scotia’s freshwater and is a favorite among local fishermen. Rainbow trout and smallmouth bass are also native species to the area, but if ocean fishing is preferred, Mackerel, Cod, Hake, Pollack, Catfish, and Boston Bluefish.

In the deep ocean, you’ll find the real sport fishing. Blue Fin Tuna, Swordfish, and several Shark types populate these waters. Anglers from all over the globe visit this area just to catch some of the lucrative fish, and they keep coming back.
Giant Bluefin Tuna Sportfishing in Nova Scotia

Each year, from June to October, schools of giant Bluefin Tuna return to Nova Scotia’s shores, giving sport fisherman the chance of a lifetime – to hook the catch of a lifetime. Sport fishers from around the globe travel here year after year to battle with these creatures – some weighing in excess of 1,000 lbs.

In 2013, Sport Fishing Magazine named Nova Scotia as one of the top 10 places in the world to catch giant tuna. (Read More) 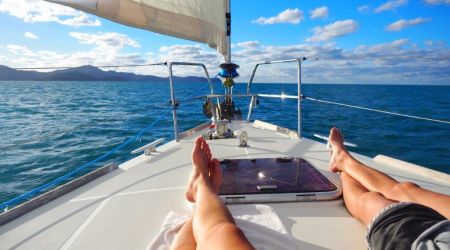 Nova Scotia, and Mahone Bay in particular, offer amazing opportunities for all levels of sailing. The islands provide great shelter for the novice while the open ocean poses welcome challenges for the more experienced nautical type. 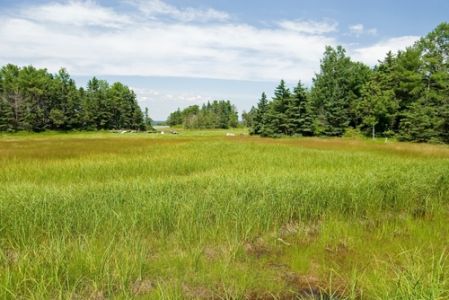 For over 200 years, Oak Island, Nova Scotia has enthralled, delighted and frustrated those who have dug in its famous Money Pit looking for the renowned Oak Island Treasure.

Oak Island is one of over 350 islands that dot picturesque Mahone Bay. This unassuming dot of land was paid little attention until 1795, when a teenaged boy discovered a circular depression in the ground and started digging. As he and his friends dug, they discovered layers of logs and what were believed to be pick scrapings along the walls of the pit. Soon after, another group of treasure seekers took over, convinced that the so-called ‘Money Pit’ was the site of long-lost buried treasure, possibly belonging to Captain Kidd or Blackbeard. They even claimed to have found a flagstone etched with symbols that, according to an amateur cryptologist, translated into “forty feet below, two million pounds lie buried”. However, persistent flooding forced the group to abandon their search.

Over the past 200 years, despite the difficulties and risks (six men have died while digging), there have been many determined efforts to find Oak Island’s treasure, even attracting the interest of US President Franklin D. Roosevelt. Today, the island is privately owned and visitation is only through guided tours but the search for treasure continues and likely won’t stop until the mystery of the Money Pit is solved.
Read More.

Your Must See & Do Checklist

"Far enough from the world’s wearisome woes….And close enough to enjoy all the comforts of a five-star resort."